The article was originally published in BrooklynRail November 2019 issue and online.

Here I am, standing on Fifth Avenue just across from Apple’s recently reopened Batcave of a store and chasing a liquid, care-free form as it flies in and out of the midtown skyscrapers surrounding us. While the shimmering “ghost” takes on various colors and shapes, sometimes even forming words, a high-pitched voice, reminiscent, perhaps, of Bjork, sings along with it. Not everyone, however, can see or hear what I do—the experience is only accessible to those carrying a particular phone provided by Apple.

This is Pipilotti Rist’s new augmented reality art piece International Liquid Finger Prayer (2019) and the last stop of my [AR]T Walk, a curated experience of six augmented reality artworks selected by the New Museum and presented by Apple. These works have been inserted into the urban landscape in and around Central Park here in New York City, but also in San Francisco, London, Tokyo, Paris, and Hong Kong. What might initially appear to be site-specific creations are actually produced on a digitally dispersed and global scale.

While taking in my surroundings, I saw a homeless man leaning against the fountain that Rist’s ghostly form arises from. He stared at me and my fellow [AR]T Walkers, seemingly confused. What he saw must have been very different from what we did: he probably saw only a group of people holding phones, moving at the same speed, all gazing in the same directions simultaneously, like some sort of obscure ritual or choreographed performance. It struck me that when we talk about the potential of augmented reality to provide a new canvas for artists or to transform the city we live in, it is not necessarily clear who “we” are. Whose reality are we really talking about, and who truly claims ownership of our experiences and our public spaces?

Our tour guide, an Apple employee, kept asking us if we think of the AR pieces as public art. My answer would be no, not yet. Although the [AR]T Walk is free and open to the public, space is limited to 10 people at a time and to guarantee a spot you have to sign up a few weeks in advance. Phones installed with the exclusive AR app are provided, but you cannot access the artworks until the guide activates your app. The tour is highly supervised, and relies on planned movements at each location. These measures of control might be have been deemed necessary by Apple to ensure a suitably polished and stable experience, but ultimately they highlight just how thoroughly this augmented reality experience relies on restricted access to information and devices.

Once you are in them, the AR works are engrossing and blur the line between what’s collective and what’s private, challenging the traditional concept of “public” art. No matter whether I was playing with a personalized monster designed by Nick Cave or following a path paved by a John Giorno poem, I felt submerged in a world inside the screen of my phone—even though I was physically walking through one of the most crowded parks in the world. Most of the works do not require interaction with the surroundings or with others, although Carsten Höller’s contribution proves an exception. It is meant to encourage collaboration with another attendee, but unfortunately most of my tour had trouble figuring out the game.

Despite the importance of active participation in AR experiences—from the [AR]T Walk to the filtered (augmented) realities provided by apps such as Snapchat, Instagram, and TikTok—users cannot truly possess the world generated by AR. Although we imagine that we “own the personal space inside our phone,” the AR world is owned by whichever company or platform these experiences are built on. Apple’s [AR]T Walk is not the first time that a corporation has overlaid an AR artwork on public space. In 2017, Snapchat collaborated with Jeff Koons to launch an AR sculpture project titled Augmented Reality World Lenses, in which users dropped a digital version of Koons’ iconic “balloon dog” onto geo-tagged physical locations. Critics not only criticized this as a superficial take on AR technology, but also broached the question of who owns physical spaces in the digital world. Who gets to say what you can or cannot see in the AR world and, perhaps more urgently, who gets to monetize it? This question is even more relevant today, given the long-lasting hype and highly profitable success of location-based AR games like Pokémon Go and Harry Potter: Wizards Unite. Hito Steyerl, who released an independently developed AR app titled Actual RealityOS (2019) for her recent exhibition at London’s Serpentine Gallery made the point directly, stating that “it’s some kind of monopoly if you have to go to some specific corporate platform to see a public intervention.”1 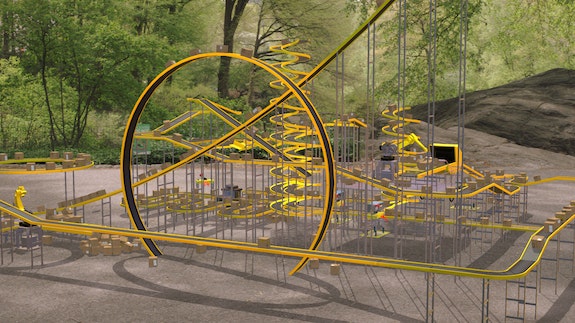 Although the [AR]T Walk was not able to escape these unresolved questions, it did realize some interesting projects that can only be fully experienced through AR, rather than screenshots posted on social media. Nathalie Djurberg and Hans Berg’s This is It (2019), for example, uses crescendoing music and a series of speech bubbles to lead attendees through a grove of trees, a journey that culminates in an opaque animated tale that poses existential questions. Cao Fei’s Trade Eden (2019) is more like a game: in a labyrinth of conveyor belts, the user can change the speed and direction of the belts, or even flick off the boxes they carry, breaking the systematic order of factory production. Works like these show the potential of augmented reality to change the way we see and interact with the world in positive ways, rather than simply laying digital imagery over physical locations, a device that’s not fundamentally very different from conventional advertising.

Indeed, with new technology, we always hope for a better world. For the moment, however, AR technology remains exclusive to certain groups of people, and most art projects that use it ultimately involve imposing commercial interests on public physical spaces. Hopefully, the most successful experiments of the [AR]T Walk will incubate work that breaks the constraints of the art and technology industries more thoroughly, rather than indirectly reinforcing them.