The article was originally published in Brooklyn Rail‘s February 2020 issue.

Imagine the Rothko Chapel, but filled with a series of close-up photographs of blue-green waters with reflected shades of red, circulating the surrounding walls in a flowy composition. Melissa McGill’s RED REGATTA: riflessi, currently on view in TOTAH’s Lower East Side gallery, builds a meditative space where the audience is so close to the sculptural details of the waves and the tangible texture of the reds that one feels almost bathing in them.

More than just offering contemplative or visual euphoria, this body of photography is an afterglow of the artist’s larger public project that achieved broader social and historical engagement. Last year, in a series of 4 public events, McGill set 52 Venetian boats, rigged with hand-painted red sails, into the Venetian Lagoon. Titled Red Regatta, McGill’s site-specific project both honored the maritime culture and history of Venice while literally raising red flags about the ecological threats and heavy tourism dooming the city and its people. The sail boats, or vela al terzo, are uniquely Venetian vessels with flat bottoms and removable masts and have been used by Venetians to navigate the shallow waters in the Venetian Lagoon for more than 1,000 years. Red Regatta is also the first artwork to be registered as a Clean Regatta, the world’s only sustainability certification for water-based events. 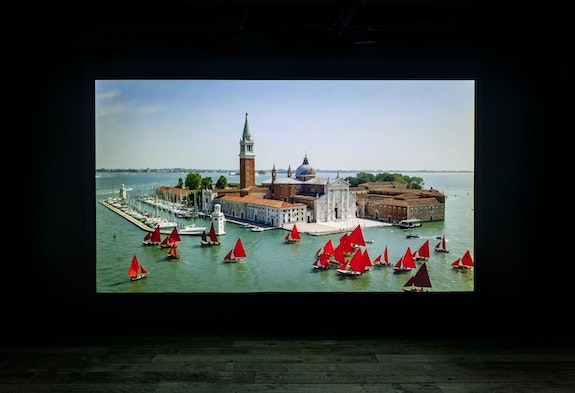 Unlike many public art projects, Red Regatta brought together the local community, including the Associazione Vela al Terzo, the historic association for vela al terzo activities and tradition, to engage in a collective experience. Almost 300 local sailors, artisans, and art students participated in the planning and creative processes, ranging from volunteering their sail boats, which are passed down over generations, to using large brushes and brooms to paint 104 sails, two sails per boat. As part of their compensation, the sailors got to keep these painted sails.

McGill took photographs of the red sails reflected on water during three of the four trips and titled them riflessi, “reflections.” Watery space occupies the entire field of each photograph while the reds raises a question about what’s present and what’s absent. The vibrant reds also give these photographs a painterly quality as if red pigments were laid over the sophisticatedly outlined waves. 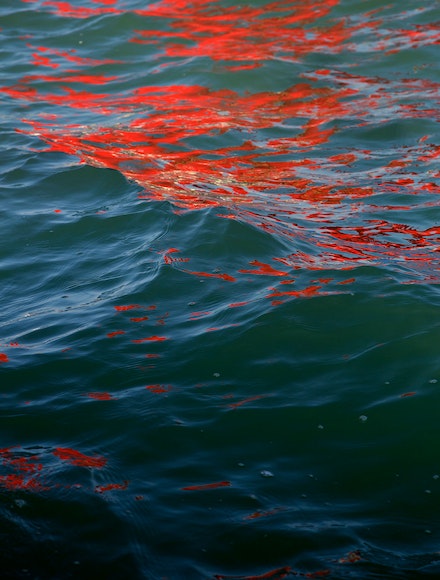 The use of red, which is prominent in both the performative and photographic embodiments of Red Regatta, further bonds the 52 sail boats into a whole and ultimately ties them to their surroundings. The red pigments that McGill created—100 in total, 52 of which were used—came directly from Venice’s visuality itself, such as its city flag, red bricks, terra cotta rooftops, and of course Venetian red, a red ocher that historically enriched the palettes of old masters like Titian and Tintoretto. Each boat was designated with a type of red that corresponded to the boat’s name or physical characteristics. (For example, a bright rosy red was given to a boat named Bocolo, referring to the Venetian Festa del bocolo, “the rosebud festival”). 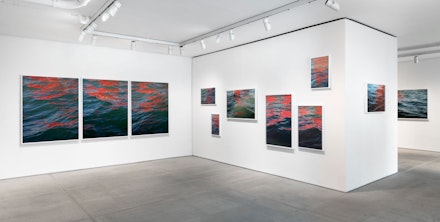 The appeal of McGill’s works lies in her ability to capture the subtle relationship between the visible and the invisible while maintaining a sophisticated sensibility. Riflessi is a poetic reflection of overlooked Venetian history and community. The red hues shine amidst the blue-green chroma and become passionate and prominent advocates. But how urgently loud is this advocate? My biggest concern for this project and its statement is their glamour, which might distract the public from the most urgent issues—rising water levels and climate change. How to keep a balance between visual spectacle and social criticism? How harsh an alarm can works like Red Regatta and riflessi ring, other than rendering the beauty of the precarious “City of Water,” even if they avoid romanticizing it? These are the questions yet to be answered.