This is an excerpt from my presentation for the symposium “Cultural Melting Bath: New Work on Contemporary Art and the Environment in Japan and Beyond,” held at University of Chicago on Jan. 19, 2016.

An ultimate getaway, a motherly form, a harmonious blend of art, architecture, and nature. Teshima Art Museum (2004-2010) sits on the northeastern hillside of Teshima Island overlooking the vast Seto Inland Sea. The expansive art space with the shape of water drop, or womb, is designed by Nishizawa Ryue, the co-founder of the architectural dual SANAA. Not a typical art museum, it houses only one installation artwork, Matrix (2010), by Naito Rei, that modulates the formation and cycle of water.

The art and the architecture are so intimately blended with the local environment that the so-called art museum seems to function beyond a pedagogical institution. If not simply a museum, what kind of environment it generates? Why would its sponsor, the Fukutake Foundation, name it as an art museum? I tried to answer these questions by looking into what the architect Nishizawa Ryue called “democratic architecture” in relation to the spirituality in Naito Rei’s art, and their connections to local landscapes and community. I argue that the Teshima Art Museum is a microcosmic reflection of the island’s aesthetic and social-historical contexts. It is not just an artistic strategy to integrate art, architecture, and nature but also a political one to revitalize the island after decades of industrial pollution, depopulation, and economic decline.

I’d like to start my presentation with a brief visual tour to Teshima Art Museum because it is indeed an experience-oriented design. As in all Benesse projects in the Seto Inland Sea, a visitor’s physical interaction with arts and museums is essential. On the Teshima island, the journey starts even before one arrives the art space.

The location of TAM and the route leading to it are designed in a way that the trip to get there is similar to a mini-pilgrimage, making TAM some sort of ultimate getaway, a mythical destination. […]

Then you enter the giant art space that spreads out widely and stuns you with a sense of purity and infinity. Nishizawa aims to create a non-hierarchical architectural space. There is no pillar or any kind of separation device to interrupt the movement of your vision, body, and mind. There is no distinction between ceiling and walls. The lack of corner and the extensive use of curve make the space appear to be a giant womb that holds everyone inside. Two wide oval voids on the top open up to the nature outside.

The two openings on the ceiling elevate one’s sight to the heaven while the horizontality of the shell-structure draws one’s attention down to the earth. On the ground is Naito Rei’s artwork Matrix, or in its original Japanese title bokei, which means “motherly form”. Water beads from underground continuously well up and flow on the floor that is covered with special waterproof material. The droplets circulate and converge into streams and puddles that eventually drip back to the underground. A cycle of life is revived. 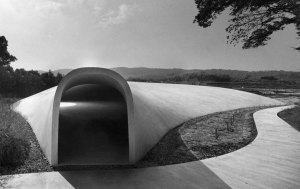 At TAM, Nishizawa’s architecture and Naito’s artwork altogether create an environment that simulates a motherly form. The distinction between architecture and art is broken down. The authority of either art or exhibition space is abandoned.

On one hand, the water-drop shape of the architecture echoes with the droplets flowing on the ground. The title “motherly form” in turn characterizes the giant womb-like structure.

On the other hand, the architecture completes the artwork, as Naito has been always searching an ideal space for her spiritually inspiring art — a “infinite” space with minimal intervention. […] The space also brings out the interior organic environment of human body. The spectacle found in environment is also found inside of a person, as the interior shares the same sort of geometry, color, and texture with the exterior. The relation between human and space in TAM therefore becomes one between micro- and macro-cosmos.

Within this giant motherly form, an attentive viewer or thinker will learn from the unique experience at TAM by being absorbed into this environment. In this sense, unlike traditional art museums that inevitably indicates a kind of intellectual hierarchy, TAM is not pedagogical in the ordinary sense of the term, even though TAM stills maintains a contemplative framework.

Nishizawa is the co-founder of SANAA, an architectural firm led by him and Sejima Kazuyo. Scholars, critics, and visitors easily regard the austerity of SANAA architecture as minimalist aesthetics, but their buildings in fact demonstrate a kind of structural clarity that challenges architectural hierarchy.

TAM allows visitors to move freely, to stop and contemplate while sharing the same space. As Nishizawa says, he wants people to act in their own ways in a museum as they do in public spaces such as train, street, and park. In this diagram, for example, he explores the two openings on the ceiling in relation to the visitor’s approach.[2]

The sense of non-hierarchical architecture goes along with Nishizawa’s agenda to create what he calls “democratic building.” He believes that architecture is driven by and made for the general public. According to his writings and interviews, Nishizawa’s democracy is a kind of anarchistic ideology. […] He also emphasizes taishusei, “popularism”, as opposed to the elitism, implies an attachment to ordinary people and neighborhood.

However, before we move on, I want to push a little bit further the concept of democracy at TAM. For Nishizawa, democracy means anti authority or hierarchy, a belief in popularism, and an engagement with the general public. At TAM, indeed, on a formal level, the expansive space is opened up and allows free movement. But different from his other museums or urban projects, TAM is much less accessible. The lack of content in this so-called museum makes it less an institution than an aesthetic experience. TAM also engages the local community in a different way, as I will talk about in a minute.

The integration of the art space and its site is not just an artistic strategy but also a social one, striving for a long-term goal of revitalizing the Teshima island after decades of depopulation and economic decline, which are largely resulted from industrial pollution.

Teshima used to be an abundant island that is especially famous for rice cultivation, and a sacred place for Buddhist ceremonies and Shinto rituals. However, since 1975, illegal dumping of industrial wastes had been carried out on the west side of Teshima until the scandal was revealed in 1990. As a result of petition, since 2000, the industrial wastes have been detoxified at refineries on Teshima and Naoshima. In spite of these make-up activities, it is still one of the biggest pollution scandals in postwar Japan and has given Teshima a name of “Island of Trash” that has further harmed the sale of local goods and driven people away from the island. In 2004, the Fukutake Foundation started to plan their project at Teshima in a hope to revitalize the island.

Under this mission, TAM not only incorporates landscape features but also uses materials from the indigenous environment. Water used in Naito’s work is taken from a 180-meter deep well that draws spring water from the local. The concrete of the shell structure is partly made from slag that is detoxified from the industrial waste at the Teshima island.

In addition, TAM also brings back the sacredness of the site. By placing TAM at Mt. Myojin, which refers to a Shinto deity, designing a trip that is similar to a pilgrimage, and creating a purified environment in the art space, Nishizawa, Naito, and their patron Fukutake Foundation reconstruct the spirituality of the Teshima island.

Furthermore, as the locals see water as a “lifeline” of Teshima, TAM engages with the locals by emphasizing the concept of water and by utilizing water to serve the community. When TAM was founded in 2010, a fallow field right next to TAM was restored via a collaboration of local residents and the Fukutake Foundation, using water coming from local source. Rice harvested from the field is sold and served at the TAM cafe.Standing by the farmland and the vast sea, and also containing flowing water inside, TAM becomes a true “motherly form,” a symbol of life force and longevity of the island,

As demonstrated above, TAM functions way beyond an art museum. Yet, according to Ms. Chiba Sayaka from the Fukutake Foundation who is in charge of the project, by naming it Teshima Art Museum they wish to improve the public image of Teshima, especially as the Japanese character for “art museum”, bijyutsukan, contains a character bi, which means “beauty.”

Speaking from my experience, as I went to Teshima two years ago as simply a tourist, TAM did achieve the goal of bringing out the beauty, the cleanness, and essence of the environment. But at the same time, we should be critical about this constructed image. Does the compelling, socially and aesthetically constructed beauty of Teshima prevent a visitor from thinking critically about the scars and history of the island? Is there a true balance between TAM’s aesthetic and political functions? How successful is the project in terms of its influence on the local residents? These are some of the questions that deserve further investigation.