The essay was originally published on Brooklyn Rail December/January 2018-2019 Issue and its website.

Two fried eggs and a kebab on a table evoking a female figure; a cocoon-shaped swing made of cotton-filled tights in the shape of tits; a fearless woman wearing a t-shirt that reads “SELFISH IN BED”—these images, posted all over social media and New York City subway, depict artworks featured in Sarah Lucas’s first U.S. survey, Sarah Lucas: Au Naturel, occupying three floors of the New Museum.

As these images suggest, sex is a major theme in Lucas’s art, and one cannot avoid feminism when talking about it. There is no doubt that her work is feminist, and, as the artist describes herself, very “blokey.” Growing up in London under the influence of second-wave feminism and starting her career as a bold Y.B.A. (Young British Artist), Lucas is not afraid of playing with phallus imagery or showing off her butch look and unyielding attitude. On the fourth floor, we see This Jaguar’s Going to Heaven (2018), an installation of cars covered with cigarettes—two motifs traditionally associated with masculinity—burned and cut into half. Beside it, a giant plaster phallus falls on top of what looks like crushed car parts in Eros(2013). Surrounding this group of works are two massive portraits of the artist from the 1990s: in one, she appears in an unapologetic “woman-spread” gesture; in the other, with a whole raw chicken covering her crotch. 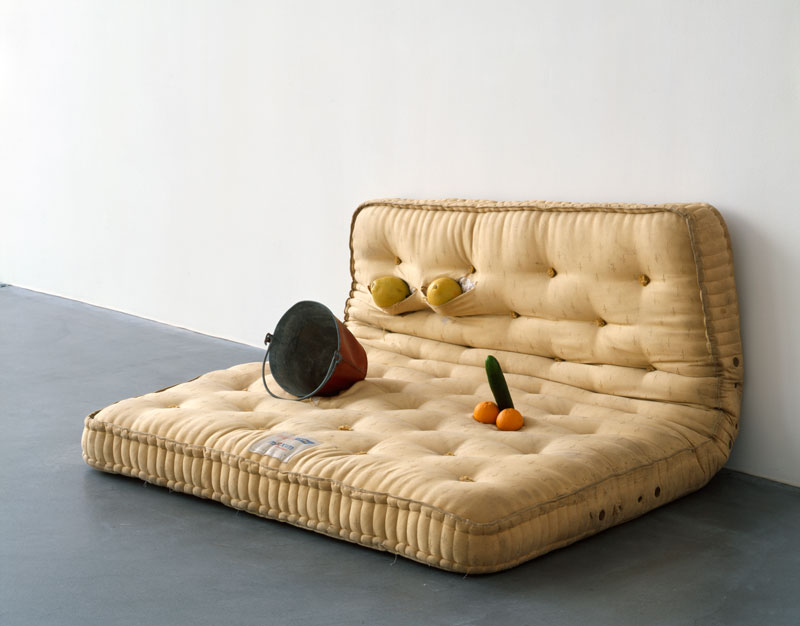 As badass as such pieces are, in an age of gender fluidity, this type of feminist work does seem a bit frozen in the past. And unsurprisingly, according to a New Museum docent, people in their 30s and older are more likely to find Lucas’s in-your-face attitude satisfying, while the younger generation are more likely to notice her art’s lack of non-binary and non-heteronormative thinking. It is necessary to discuss the limitations of Lucas’s punky feminism, but also credit the important work that has led us to where we are today. In the recent New York Times article “Is Sarah Lucas Right for the #MeToo Moment?,” Martha Schwendener remarks, “Ms. Lucas’s art feels like an important historical springboard.”

Lucas’s “blokey” feminism deserves all the attention it has received, but Lucas does not keep her eggs in one basket (metaphorically and literally, since she uses eggs in so many different ways in her work). Her art has multiple significances, and important aspects of her work are sometimes glossed over when highlighting the feminist value of her art—to name one, the power of suggestion. Starting in the 1990s, Lucas used quotidian objects to make sculptures that toy with what people see when looking at certain objects. On the second floor there is a pair of chairs: a dildo sits on one chair and an open denture, recalling an open vagina, sits on the other. This simple setup vividly suggests what’s confirmed in the title, The Old Couple (1991). Her artwork becomes an implicit association test that measures our imagination. Her iconic work Au Naturel (1994), after which the exhibition is named, is a dirty mattress inclined against a wall; inserted into the mattress are a pair of melons and a bucket, implying a woman, and a cucumber erected between two oranges, a man. “Au Naturel” is a French phrase that means “in the nude” or “in the natural,” referring to something unmasked, uncooked—as it is. The phrase captures Lucas’s work and methodology. As Quinn Latimer writes in the exhibition catalogue, Lucas’s sculptures “turn metaphoric innuendo into expert endless endgames: ‘it is what it is.’”

Au Naturel is a simple but strong statement that explores, and at the same time criticizes, how people’s minds are conditioned to associate one thing with another. In another mattress sculpture Beyond the Pleasure principle (Freud) (2000), the mattress is hung on a cloth rack and penetrated by a neon tube, while two light balls dangle on either side. A hanger, two light bulbs, and a bucket are also arranged meticulously on the rack to suggest a ghostly female body. Originally created for and displayed at the Freud Museum London, the sculpture asserts that gender is but a construct, a suggestion. 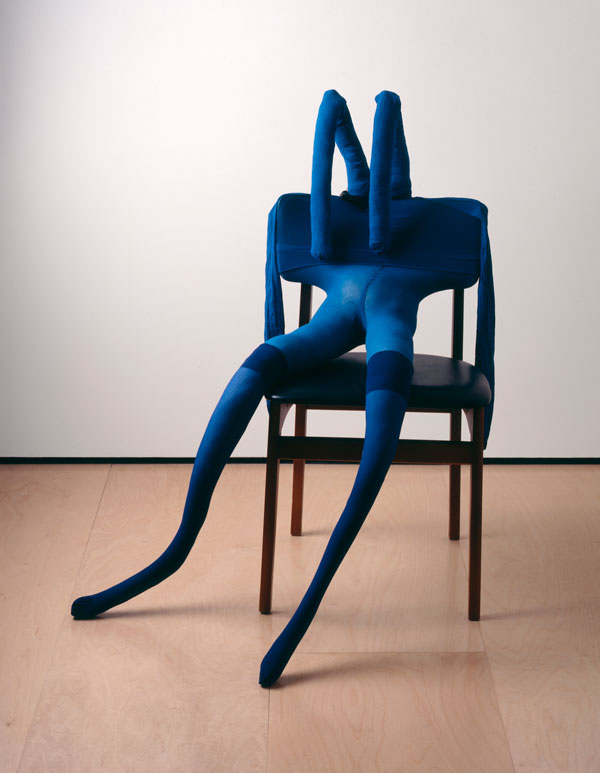 The smell of depression and self-harm, although often ignored and subtle, has always accompanied Lucas’s zesty humor and daring attitude. It can be found inscribed inside a dirty toilet (the sculpture Is Suicide Genetic? (1996)), or spilled on the floor leaking from a bathtub of pink liquid (Down Below (1997)). In the Good Muse series from 2015, she cast some of her girlfriends’ bodies from the waist down straddling a chair, reclining on a freezer, or kneeling over a toilet. A cigarette is inserted to each of the casted bodies’ butt or crotch. They are proud, powerful muses we can relate with because of empowerment but also shared existential crises.

Lucas pushes introspection further in her recent sculpture series NUDS (2009–). These biomorphic shapes made of entangled stuffed hosiery, sometimes knots, and are more abstract and contemplative than Bunnies or Au Naturel. If her earlier works reduce the body to genitalia to expose our subconscious conditioning to social and economic stereotypes, NUDS reduces our anatomy to primal organic shapes that question how the mind projects human existence onto the physical body. The sculptures are almost Lacanian—as if a baby sees their fractured body in a mirror before it has learned to understand the segments as a whole, their image as the self. 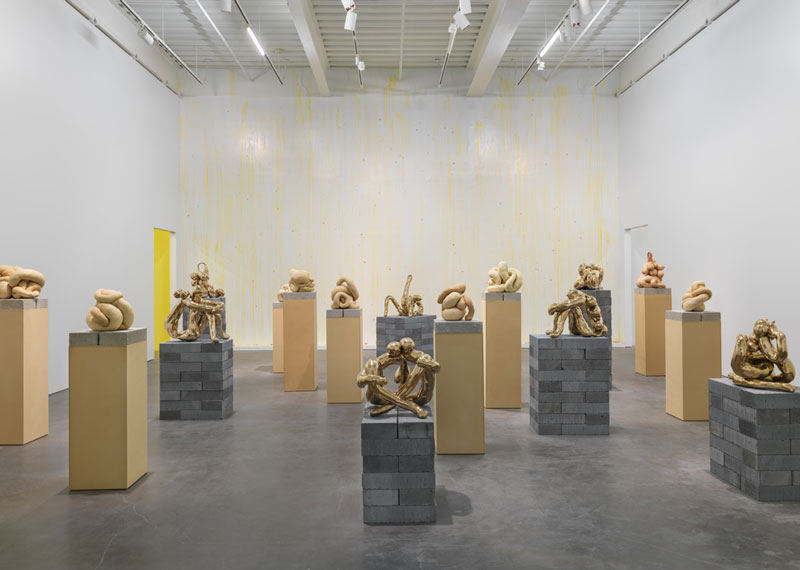 Born and raised in a working-class family and maintaining a Maker’s attitude, Lucas has created many things in her ongoing exploration of the power of suggestion. There are about 150 objects shown in this retrospective, of all different shades and shapes, and that they tend to be categorized as a consideration of sex or gender alone says more about us than it does about Lucas. Her artistic talent is her ability to turn everyday motifs and items into literal and visual puns with multifold meanings. (Her obsessed interest in eggs, for example, is precisely because of their unbounded, generative capacity, their “enormous potential for life.”1) Her works are sophisticated but raw, served au naturel. In that spirit, I shall end this article with a work from 1995 that suggests nothing and everything, a work simply as it is: six plaster eggs in a recycled carton, each inscribed with a letter that reads “F U T U R E.” Like all of Lucas’s work, it is as poetic as it is vulgar, as sincere as it is ironic, as empowering as it is depressing, and as meaningful as it is mundane.