Skip to content
The article was originally published on BrooklynRail web and Issue June 2019. 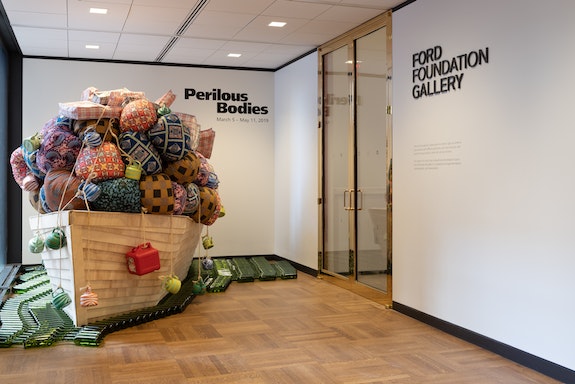 Body is a battleground. Body is a weapon. Body is testimony of endless fights against racial, class, and sexual oppression. In art, bodies are usually exposed unapologetically—their presence bold with power. However, as the new Ford Foundation Gallery’s inaugural exhibition, Perilous Bodies, reminds us, often times it is the migration, transformation, or even the outright absence of bodies that make a statement, revealing untold stories of geo-economic injustice, human rights crisis, and war.

Walking down the second floor of the Ford Foundation Center for Social Justice, the audience is confronted by a life-size boat over-piled with water buckets and bags filled with indigenous African fabric. Although bodies are absent from the scene, the piece evokes a group of refugees and adventurers. Instead of floating on water, the boat is placed on top of and surrounded by a precarious surface of green glass bottles. The Road to Exile (2018)—as the title implies—is a journey fueled with hopes to escape bad situations but destined to be dangerous. Placed just outside the entrance of the gallery, the installation by Cameroonian artist Barthélémy Toguo reinforces a sense of displacement.

19 artists from 11 nations, all of whom are people of color, bring forward their individual experience with systemic violence across the globe. For instance, the tapestry by Otobong Nkanga, The Weight of Scars (2015), is a 20-feet wide, 8-feet tall map of Nigeria combined with several photographic prints. Two Kafkaesque bodies, with marionette arms in place of torsos, stand at each edge of the composition, holding rope-like lines connecting a constellation of orbs. Each orb houses a photo of an abandoned mineral extraction site. Is it a tug of war? Or are the two bodies trying to maintain earthly connections despite profit-driven exploitations of natural resources? In either case, the artwork maps out how people are intricately weaved into lands as bodies, raw materials, and goods are forced to migrate across regions. The artist makes use of golden threads, whose luster denotes the allure of raw minerals and their products which results in the flux of materials, economy, and local communities.

It is a well-deserved credit—not a superficial selling point—that all artists featured in Perilous Bodies are people of color, most of whom are women, not to mention that the exhibition is led by three women of color: the curatorial duo Jaishri Abichandani and Natasha Becker and the Director of the Ford Foundation Gallery Lisa Kim. Yet, this shall not distract us from the effective curation. Each artwork is deliberately arranged, resulting in a two-room gallery space where many complex subjects speak to each other, thematically and aesthetically.

The first gallery includes several visceral pieces that remember bodies disappeared as a result of mass military violence. A cluster of miniature missiles spans across the ceiling, falling down towards the entryway. Titled Hellfire II (2017-2018), Mahwish Chishty’s installation is composed of over 400 foam replicas of hellfire missiles, each representing a civilian casualty during the US drone strikes in Pakistan. Underneath the missiles and sitting against the wall across the entry is an array of photographic lightboxes showing images of destroyed buildings in Syria. The absence of living beings in these photos and the altar-like presentation make the installation, finding one’s shadow in ruins and rubble (2014) by Tiffany Chung, a haunting, quiet memorial of lost bodies and lost homes. Then there are Sara Rahbar’s two American flags hung on the wall, right above the lightboxes, that are fully covered by vintage military objects like badges, belts, and tactical pockets.

A series of what sounds like gunshots draws visitors into the next room, where they encounter individual bodies in fragmented or suggested forms. These striking works respond to different forms of discrimination and violence against minority groups, ranging from the recent hate crimes against black trans women in Florida (David Antonio Cruz, inmysleeplesssolitudetonight, portrait of the florida girls [2019]) to the decades-long problem of sexual violence and victim-blaming in India (Jasmeen Patheja, Meet To Sleep / I Never ‘Ask For It’ [2016-2018]). The “gunshots” come from The Blue Wall of Violence (1999) by Dread Scott, an installation showing six shooting targets, each featuring a sculptural arm reaching out and holding some mundane object: a candy bar, a wallet, a chain of keys. The targets represent six black men and what they had on hand when murdered. The sound of gunshots is in fact produced by three robotic arms striking the surface of a coffin in front of the targets. The work, created two decades ago, feels dreadfully relevant today.

Perilous Bodies is the first act in a trilogy of exhibitions for the gallery’s inaugural theme, Utopian Imagination. While most works in the show travel back in time to reflect on social injustice from different perspectives, Hannah Brontë’s afro-futuristic video Umma’s Tongue–molten at 6000° (2017) points toward our pending future. A group of indigenous women stands against scenes of environmental destruction, often popping glitches, and rap about the destruction of the mother earth, “Umma.” As the artist introduces the work, “Umma’s tongue is sharp as she slices through the polluted air, rapping 200,000 years of human debris.” The message from “Umma” is a stark warning: “I am your beginning; I will be your end.”

Perilous Bodies demonstrates that the body, even when broken or vanished, serves as a record of how institutional power shapes and impacts one’s existence. It poses a question, which hopefully will be addressed in the following phases of the exhibition trilogy. As Umma reclaims her power, as unjust gunshots fill the room, it’s time to reach for a more just future.